G-Dragon - 'One of a Kind': Semiotic and Lyrical Analysis 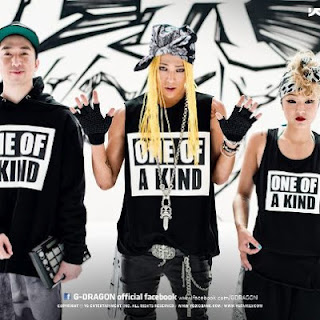 [On UnitedKpop too! - read it here]

G-Dragon finally made his long-awaited comeback with the release of the song and music video 'One Of A Kind'.
I am a big fan of GD and I was really excited to see what he would come out with. One of the things I like about YG Entertainment is their ridiculous extravagance and creativity in their productions - and GD is probably the craziest of all in this respect.
Honestly, I was not sure what to make of the song and MV at first, it was all a bit shocking. However, it took just a couple more watches before I began to love it.

I think this may have been because it initially comes across as nothing but sheer arrogance in both the images that are presented and the small amount of English lyrics given.
After looking at the English translation of the lyrics though, I began to see things a little differently...

SO, here is a semiotic and lyrical analysis of G-Dragon's latest offering! (Yep. I'm a geek).


The video opens with the face of a tiger, which is then revealed to actually be part of G-Dragon's jacket. He walks forward and we see that he is wearing an entire outfit covered in tiger stripes from top-to-bottom (yeah, if there was any doubt that this was GD before, that's certainly gone now!)
GD holds a lead, on the end of which is a tiger cub.

I think this is just to extend the idea of being "wild and young" - he mimics the tiger by lying down at the same time and copying it's physical position.
There is also the clear show of affluence in the fact that someone can actually acquire this wild animal as a pet and drag it around on a lead. I think that is a general Hip Hop show of power. 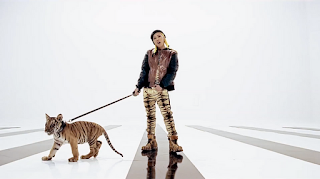 We see a little boy and a girl conversing on a cup phone to one another. GD is then shown to also be in the conversation using a cup along with the young children.
This, along with the accompanying lyrics further put out the idea that GD is young. He is talking to his seniors who assume that he is bored and that is why he is bothering them. He then apologises to them for being "hot stuff"- giving the idea that he is energetic, hyperactive but packing a lot of punch. He may be turning an insult from anti-fans around, making a childish way become his strong point. 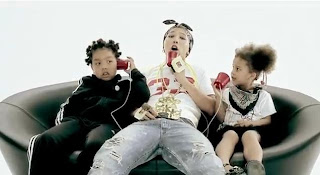 GD is shown in a criminal line-up. This shot is inter-spliced with a dark and extravagent shot with him dressed in sparkly, expensive-looking clothing. When you look carefully, you can tell that the people he is surrounded in this shot are also the ones next to him in the criminal line-up.
G-Dragon raps about being different and constantly being a trend-setter no matter what he does. He suggests that it comes naturally to him.
The images of criminality presented could be saying that he feels he is always being persecuted by people for simply being himself. He has gotten into a bit of trouble before with regards to what his music contains, so perhaps he is saying that he has felt imprisoned from his creativity by the criticisms he has received in the past. 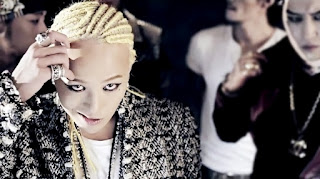 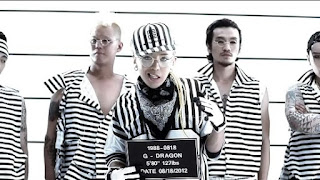 "Because I'm crazy, because that's just me, because people go crazy over anything I do."

The line in the chorus "Young and rich. that's just me" sticks out a lot. To be honest, I cannot see this as anything other than bragging, which is a common thing for a lot of rappers.

GD lies down with a giant Barbie doll and raps about how his skills make him successful with the ladies. Barbie is obviously an icon in what is seen by many as the "ideal woman", which when used here, suggests that GD can get the best of the best in terms of female company.

However, there is a comical moment in which the Barbie doll 'slaps' him in the face after he kisses her cheek. This could be his way of saying that  he is not that successful with women or that there is more to his career than getting girls. 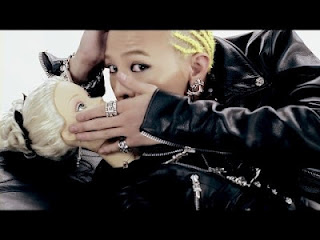 "My rap takes her to the bedroom and lays her down, I'm busy."

GD seems to be quote people complaining about him. People saying that he is a "tiny guy" that tries too hard. This persona recalls that they can't look anywhere without being confronted with his music and all of it is sold out.
This is probably GD saying that even if people are annoyed by his presence, they cannot deny his high level of success.
He then says: "You can't live because of me?" suggesting that this is a jealousy that he remains oblivious to and that the only one affected will be those who are jealous.

GD is then shown to be fighting in a boxing ring. He puts up a good fight, but is repeatedly punched until he is essentially knocked into the next scene - sitting at the head of a long dining-table. 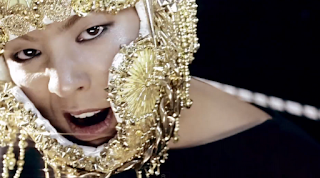 "You can't live because of me?"
He is shown looking vicious and evil, everything has a blue light to it and plates and cutlery are strewn everywhere.
He stabs the meat on his plate that resembles a heart, it turns blood red.
The cameras then loosens back to the opposite end of the dining-table and a hand removes a pair of sunglasses. A completely different scene is now apparent - plates and cutlery are well set and a very smart-looking GD is shown cutting the meat on his plate properly as he smiles sweetly for the camera.
The lyrics here show him pleading with people to not view him as a bad person.

This, paired with the images may be to tell people that most do not really know him. It could also say that he feels pressured to keep a good image and this means that he does not always remain true to himself.
What I personally think he is saying here is that he finds it ridiculous that he can instantly go from being a good guy to a bad guy in the blink of an eye. He could be saying that the general public are too fickle and fail see him as a human that is neither fully good nor fully evil.
--- 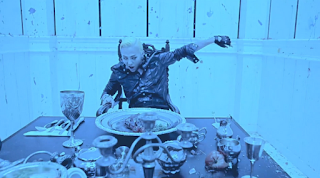 "Lalala please view me in a pretty way - don't speak about me." 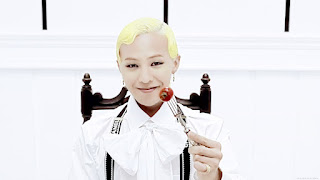 "Lalala please view me in a cute way - please love me."

A small bear cub features in the music video and, as with the tiger cub, GD assumes a 'bear-like' character with his clothing and actions. There is a line repeated consistently: "I'm a talented bear (no) I'm more of a fox than a bear." that becomes a lot more prevalent here thanks to the inclusion of the cub.
A "talented bear" gives the idea that he is perhaps innocent and controlled by people bigger than him (with connotations of dancing bears that are made to submit to humans through cruel treatment).
He then corrects himself, saying he is more like a fox. This may mean that, even though people may see GD as someone who does what YG Entertainment wants, he is actually a lot more cunning and clever than to be subjected to that. He is, once again, asserting the idea that he knows what he is doing and is very savvy to the ways of the entertainment industry. 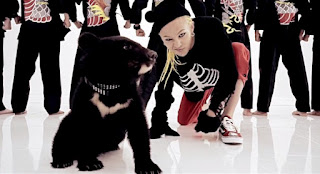 There is also another frequently repeated and prevalent line in: "I'm a hateable guy (woah), I'm an expensive person." I take this as perhaps him taking more insults he has received from anti-fans and agreeing with them.
When you agree with someone who is trying to insult you, you can sometimes steal their thunder in that you are not giving them the reaction they want from you.

GD is shown sitting in a chair surrounded by racks of clothing. A pretty woman is offering him clothes that he either shuns or accepts the items half-heartedly. As well as this, he is reading a document with a phone pressed to his ear.
His expressions show that he is bored with whomever he is talking to and the previous line "Yes Hyung, Yes Noona..." is repeated. This may now suggest that he hasn't got the time to answer to anyone else as he is far too busy living his life of affluence and success. 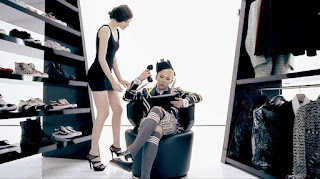 "Yes Hyung, Yes Noona..."
He is then shown in a full tennis outfit, flashing the Chanel logo that emblazons every single item to the camera.
He is surrounded by countless glass cases that contain all of his past stage outfits. He proceeds to hit the tennis ball into each one - sending shards of glass everywhere. He says: "Follow me, Follow me" as he does this. It could be that he is saying he is constantly moving forward in his career and never looks back. He could also be again acknowledging the fact that he is a trend-setter and he is encouraging people to copy him, because he knows he will have moved on to the next thing by the time anyone manages to mimic him.

Overall, one can see G-Dragon's latest offering as something that holds multiple meanings. Many may be tempted to see it as nothing other than a typical Hip Hop track that inflates the ego of the rapper and one cannot deny that GD is flaunting his success and wealth here.

However, personally, I am inclined to see it as something that is slightly deeper than that. I feel it is a song to address all the critics that he has had over the years. GD acknowledges that he is young and living the life of a spoiled kid, but he is also quick to assert that he is in this position because he is talented and works hard at what he does.
We also see glimpses of his more vulnerable side, he feels pressured to deliver and to be loved by everyone, but he also shows that he is now clever and experienced enough to be comfortable in doing his own thing.

[Images source: Google Images]
Posted by Orrigoshi at 1:51 am

Email ThisBlogThis!Share to TwitterShare to FacebookShare to Pinterest
Labels: G-Dragon, One Of A Kind, Semiotic and Lyrical Analysis, YG Entertainment

Orrigoshi
My name is Holly. (A friend made 'Orrigoshi' my 'Japanese nickname' when we were in school).