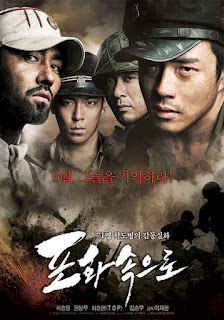 [On UnitedKpop too - read it here]

I will be the first to admit that my knowledge of Warfare and History in general are seriously lacking. It has never been something that has interested me, which I know is terrible because our history has led us to where we are today and millions of people have fought in wars for the freedom that I currently take for granted.
Even so, you would probably have to tie me down and tape my eyes open for me to sit through a film about a true war story.


Why on earth was I watching this film then?
That question can be simply answered with three letters - T.O.P!
I know, it's so shameful. Not only do I lack knowledge in very important things, but I am also a shameful fangirl!

Okay, putting the fact that I am a huge fan of T.O.P aside - I was genuinely curious about his acting ability. I have heard so many good things about it, but I have never really been able to believe it.
When you watch him on programmes, you can only see a seemingly very shy and awkward man. He seems like someone who is very sweet and enjoys what he does for a career, but ultimately prefers not to be the main focus of anything...ever.

So...this guy being a great actor? Hmm.
I simply put it down to VIPs or T.O.P fangirls gushing over their favourite idol.
You get the impression that a celebrity could murder someone in cold blood and admit to it, but still have fans on their side.
Nevertheless, I wanted to see things for myself.
-----

During the Korean War, the North and South sides engaged in a bloody fight with one another. The North were strong and organised, slowly taking hold of provinces in the South one-by-one.
The dictator of the North believed that Korea should be one whole country under his power and would do all he could to get his way.

South Korean forces became dangerously depleted and the situation became so desperate that the only option was to recruit any and all able-bodied men to fight, regardless of their severe lack of training or experience.

This film is based on the true story of a group of 71 student soldiers and their efforts to defend Pohang-dong Girls' Middle School from the advancing North Korean forces. The inexperienced soldiers managed to keep the opposing forces at bay for 11 hours on August 11th 1950. However, all those student soldiers lost their lives on that day.

The film introduces the character Oh Jung Bum (Choi Seung Hyun/T.O.P) - a young man that has fought briefly in the war and survived only by the skin of his teeth thus far. He is an incredibly quiet and timid person that is still reeling from his experiences on the battlefield and grieving for a friend that may not have died had he only been a more competent fighter.

Jung Bum is thrust into a role as leader of the 70 student soldiers due to the fact that he is the most experienced of all stationed at the middle-school.

He is introduced to a group of cocky and aggressive delinquents, apparently led by the arrogant Ku Kap Jo (Kwon Sang Woo)  and they all seem to be unwilling to obey anyone's orders.

Jung Bum is in for an even tougher time than he had previously expected.
---

OVERALL
I was so pleasantly surprised by this film and I really enjoyed it. I originally thought that I was hearing biased BIGBANG fans' opinions on the film, but I can now see where these people were coming from.
Despite being an idol, T.O.P really did show his talent in this film, along with every other actor that worked on the large-scale production.

The film shows the immense sadness and tragedy of the event. It hooks you in emotionally and illustrates how very brave and courageous these men were. It makes you wonder what they would think of it if they saw it.

There was some beauty in the comradeship that the conflict brought out of the soldiers and some heart-wrenching sadness in the fact that these men were so very young and so very inexperienced in what they were doing. Viewers will likely experience an array of emotions before the credits roll.

I would recommend this film to anyone that is looking for a great mix of drama and action.
Even if, like me, you never usually touch war films with a 50ft pole, I honestly would push you to give this one a try.

It is a film that tells of a truly sad event, but it warms the heart all the same.

Posted by Orrigoshi at 9:07 am

Orrigoshi
My name is Holly. (A friend made 'Orrigoshi' my 'Japanese nickname' when we were in school).